We no longer live in a world where we walk around with our heads stuck in a book.

What does Pokémon Go mean for real estate owners?

Now our heads are stuck in our phones. Rather than watch where we are going, we are letting an augmented reality app enhance the real world and, for the players of Pokémon Go, guide us along so that we can catch anime creatures. Our property lawyers Astrid Stanley and Daniel Swimer take a look at what does Pokémon Go means for real estate owners? 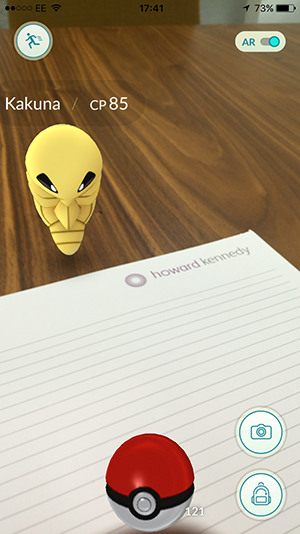 With over five million players in the UK alone, Pokémon Go looks to be a firmly established, but what does it mean for real estate owners?

There have already been reports of mobile phones being stolen, distracted gamers aimlessly walking out in front of moving vehicles, and groups herding into local shops to catch Pokémon characters. There have even been concerns that gamers are accessing the app at sensitive sites, such as the Holocaust memorial at Auschwitz and the Hiroshima Memorial, to complete their collection.

Pokémon Go does not, however, give members of the public a licence to trespass on private land. Gamers are at risk of being held liable for crossing onto private property or land without consent, even if that access is accidental.

Whilst it is unlikely that momentary instances of trespass will be pursued in court, landowners are likely to be more concerned by the damage gamers might cause to property or themselves, whether accidentally or otherwise, in the rush to catch a Pokémon.

Guidance has already been issued by the Police, warning people against trespassing on to private property. We envisage that in the not too distant future we will see signs prohibiting members of the public from entering shops or private buildings just to catch Pokémon characters. Policing this will no doubt prove difficult.

Pokémon Go places, seemingly at random, “PokéStops" and "Gyms" to entice and engage with gamers. It is possible to have these ‘stops’ removed, but it will require landowners and businesses to download and join the game, making the request via the app. Stops in dangerous or sensitive sites will undoubtedly be removed quickly, but will requests be raised by all landowners?

Despite the issues that have arisen there will be opportunities. It is understood that retailers are already, in fact, in discussions with Pokémon Go to secure sponsored locations in the hope of driving users to visit their stores.

Whilst sponsorship for a sought-after Pokémon character to appear in your store may increase footfall, it does not necessarily mean that Pokémon "players" will be spending their hard earned cash with you.

This app, like many others, also collects all sorts of player data, such as email addresses and information about a player's device and location, which has great value for advertisers.

Will all this mean that we will start to see Pokémon Go vouchers? How about a special "Top Shop" Pokémon that, if caught, will give customers a discount on a particular day and at a particular time? Or if you are someone visiting Pret five times a week, can the newly opened competition around the corner buy this information from Pokémon Go and use it to their advantage to offer you incentives to shop?

Quite apart from the data protection issues that arise, too much advertising may cause Pokémon Go to fall out of fashion and the makers will no doubt want to avoid incorporating too much commercial sponsorship too soon.

The virtual space may soon be as valuable as the physical.

Augmented reality – Pokemon Go being only be the start – will present considerable opportunities for businesses.

What if you could walk into the dressing room at a high street retail shop, try on your outfit, put on your virtual reality goggles and be transported to a nightclub, the French Riviera or the Opera? And if this is the future, what impact will it have on retailers when they look for suitable units and consider fit out works - trip hazards will need to be minimised and open spaces will be the preference!

And why stop at retailers? What if your sales suite as a real estate developer was simply an empty shell, with potential purchasers downloading an augmented reality app accompanied by virtual reality headwear able to view the designed apartment, but to also able to walk around the whole development.

The opportunities are endless and are limited by just our imaginations. What is quite clear is that property no longer simply consists of bricks and mortar, but the virtual space within it.

When considering real estate requirements, businesses will need to start reflecting not only on what is happening right now with technology, but where it could go in the future. Lease provisions, restrictive covenants and the use of premises generally will need to be adapted to protect parties against, and to take advantage of, innovative advances in technology that are continually changing. The law, as is often the case, has some catching up to do if it is to ‘catch them all’.

*This article was written for and originally appeared in Estates Gazette